It comes with a converter and ink cartridge.

＜About NICE Series＞
Nice is a world-renowned resort and tourist city located in Cote d’Azur in southern France. Blessed with a mild climate, beautiful ocean and mountains, the city is also known as the “Bay of Angels,” and has attracted many aristocrats and artists. We have been creating NICE series to express a fountain pen that invokes the contrast between a subdued light and the shimmering water.

＜Barrel Design＞
It applies a sandblast finish, a process to make asperities on the surface by striking sand grains, providing an opaque glass image.
On the surface, we have cut grooves at the precise angles with shaper cutting, which depending on the angle of the cut, the shimmer of the light changes.

＜Slip & Seal Mechanism＞
It applies “Slip & Seal Mechanism” that prevents dye or pigment ink from drying out in the pen; therefore, even after two years of not using the pen with the cap on, it provides smooth, reliable writing. This mechanism allows those who only use the pen once or twice a year writing with fresh new ink. 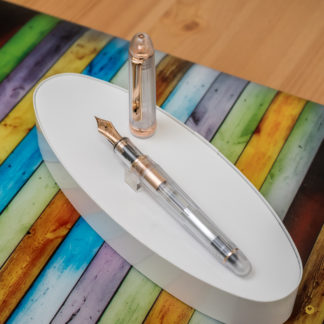 You're viewing: Platinum #3776 Century Nice Rose Gold Fountain Pen $320.00
Select options
Join Waitlist We will inform you when the product arrives in stock. Please leave your valid email address below.
You need to Login for joining waitlist.
Login Register
0